What changed, what didn’t and what you can expect in the year ahead

Quite a few health and other employee benefits policy changes developed in 2018. The full list includes some welcome regulations and legislative changes, but also new restrictions on some popular taxfavored benefits. This advisory highlights key policy changes as well as upcoming deadlines in the year ahead.

The Tax Cuts and Jobs Act (TCJA) contained the most sweeping changes to federal tax laws in decades. Read the Advisory.

Enacted at the tail end of 2017, most of the provisions were first effective starting in 2018. In many respects, the law lives up to its name by significantly reducing tax rates for businesses and individuals. However, in order to help pay for reduced rates and other tax relief, the law also cut back on and repeals some prior tax credits and deductions. Key changes made by the TCJA with respect to employee benefits included the following:

In addition to these changes, TCJA included a variety of other provisions that reduced tax benefits for certain common arrangements, including changes to the tax rules for meals and entertainment and significant changes to the deductibility of certain executive compensation.

EEOC wellness plan rules: In 2017, the EEOC issued comprehensive rules governing wellness program compliance under the Americans with Disabilities Act (ADA) and the Genetic Information Nondiscrimination Act (GINA). These rules added a number of new compliance obligations and established somewhat of a safe harbor (30 percent) for the value of wellness program incentives. In AARP v. EEOC, the incentive safe harbor portion of these rules has been set aside. For 2019, employers with wellness programs that include incentives should review the impact of this decision on their programs.

On the retirement side: The Department of Labor took the first formal step in fulfilling the directives of the president’s August 2018 executive order on retirement plans and issued proposed rules on multiple employer plans (MEPs). Similar to the goals of the AHP rules, the proposed MEP rules would clarify the circumstances under which an employer group or association or a professional employer organization (PEO) could sponsor a workplace retirement plan. The rules are expected to be finalized in early 2019.

The president also directed the DOL and IRS to make retirement plan notices more understandable and useful for plan participants, while also reducing the costs on employers. Finally, the IRS was directed to review the life expectancy and distribution tables currently used for determining required distributions from tax-qualified plans. The objective was to bring the tables up to date so that retirement funds can be drawn out more slowly, rather than forcing larger distributions earlier on. So, stay tuned, as there will be more to come on retirement plans. 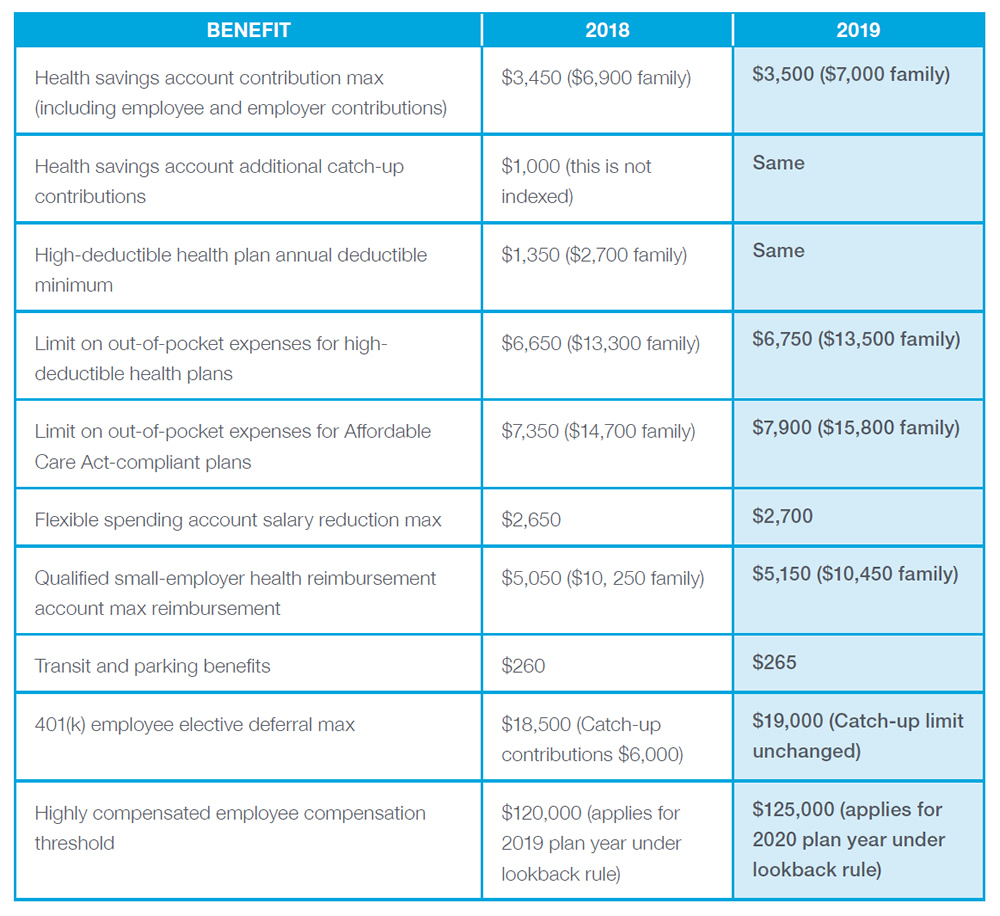 WHAT TO EXPECT NEXT: UPCOMING DEADLINES AND EFFECTIVE DATES

The Affordable Care Act (ACA) requires employers, insurers and certain other providers of minimum essential coverage (MEC) to provide health coverage information to individuals and the IRS. Here’s a reminder of what’s required:

The IRS recently announced the deadlines for providing the 2018 forms, including an extended due date for furnishing the forms to individuals. There is no extension of the time for filing with the IRS. The IRS also provided some penalty relief for good faith compliance. The filing deadlines are below. For more information see IRS Notice 2018-94.

The Patient-Centered Outcomes Research Institute (PCORI) fee was imposed under the ACA for plan years ending on or after Oct. 1, 2012, and before Oct. 1, 2019. These dates follow the fiscal year of the federal government, which ends on Sept. 30 of each calendar year. The fee is paid once each year and is due on the July 31 following the end of the plan year. For example, for a calendar-year plan, the fee for 2018 is due on July 31, 2019.

The fee was imposed on specified health insurance and is payable by the employer or other plan sponsor of a self-funded plan and by the insurer with respect to fully insured coverage. The fee is based on the average number of lives covered under the plan. Special rules apply for health reimbursement arrangements (HRAs) required to report.

“Cadillac Plan” tax delay: The so-called “Cadillac Plan” tax is a 40 percent excise tax on the cost of employer sponsored health coverage that exceeds specified dollar thresholds. The tax was originally scheduled to go into effect in 2018 but has been delayed several times, most recently by legislation enacted in January 2018. The tax is scheduled to go into effect in 2022, unless it is further delayed by Congress.

Is there more to come?

Late in 2018, a federal district court judge in Texas ruled that the repeal of the Affordable Care Act’s individual mandate makes the entire law unconstitutional. The ruling is not a final order and doesn’t stop the enforcement or need to comply with the ACA. However, the ruling will be appealed and, ultimately, the case may end up in the Supreme Court. If so, it would be the third time the Court has addressed the ACA. Policy will continue to evolve, and we’ll likely see more changes in the new year.