What are they and why do they matter? 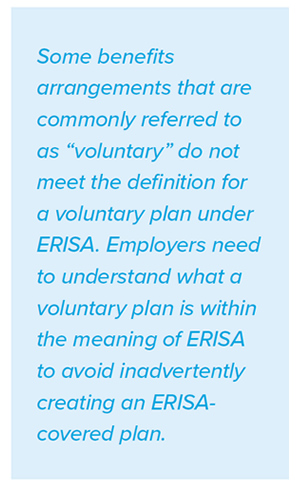 Many employers make supplemental benefits such as critical illness coverage, hospital indemnity and other fixed indemnity coverage, as well as accident and disability coverage, available to their employees. These benefits are commonly referred to by employee benefits advisors, insurers, and brokers as supplemental or “voluntary” benefits to distinguish the benefits from employer-sponsored primary health coverage and retirement plans. Although not part of The Employee Retirement Income Security Act of 1974 (ERISA), these supplemental insurance benefits are offered by insurers at the worksite and premiums are paid through payroll deduction.

Even though “voluntary” is common terminology for these benefits, the term also has a specific meaning under ERISA. If the voluntary plan requirements under ERISA are met, then the arrangement through which supplemental plans are made available by insurers is not subject to ERISA requirements. Some benefits arrangements that are commonly referred to as “voluntary” do not meet the definition for a voluntary plan under ERISA, for example, because the employer contributes to the plan.

For many employers, the additional compliance that ERISA adds is not an issue, for example, if they already have benefits plans subject to ERISA, such as a major medical group health plan. Others, however, may prefer to stay outside of ERISA. That’s why it’s important for employers to understand what a voluntary plan is within the meaning of ERISA to avoid inadvertently creating an ERISA-covered plan.

This article discusses what it means for a supplemental plan to be voluntary under ERISA and provides a high-level overview of related issues compared to providing benefits through a more formal employer sponsored program. This article is limited to supplemental products, which are also known as “excepted benefits” because they are excepted from Affordable Care Act mandates. Different issues arise with other products, including individual market primary medical plans.

What is a voluntary plan under ERISA?

Most benefits offered by employers to employees through the worksite are employee benefit plans subject to ERISA. However, there is a safe harbor exception from ERISA for supplemental coverage if the employer provides payroll deduction for the cost of the policy but does not otherwise fund, endorse or sponsor the program. Benefits such as critical illness coverage, hospital indemnity and other fixed indemnity coverage, as well as accident and disability coverage, can qualify for an ERISA exemption under this safe harbor. The key element in determining whether a plan is voluntary under ERISA is the level of involvement of the employer.

What are the elements of the ERISA voluntary plan safe harbor?

The safe harbor has four parts, all of which must be satisfied:

What types of employer actions are and are not prohibited endorsement?

The following are some common employer actions that are generally permitted under the voluntary plan safe harbor:

The following are common employer actions that individually (or taken together) increase the risk that a plan will fall out of the safe harbor and into ERISA:

What if the plan I thought was a ‘voluntary’ plan is subject to ERISA?

It is important to keep in mind that employers may choose to offer supplemental products through an ERISA-covered group plan – and many do. Also, employers that offer group health plan coverage or have a retirement plan, such as a 401(k) for their employees, are already dealing with ERISA.

ERISA has a variety of requirements. For example, ERISA requires that the plan must be administered in accordance with a written plan document and the employer or plan administrator must provide employees a Summary Plan Description describing the plan. ERISA also imposes annual (Form 5500) reporting requirements on most plans. There is a very important exception from ERISA for fully insured plans with fewer than 100 participants. The employer or other plan administrator may be subject to fiduciary rules for some actions, such as when handling ERISA-covered contributions. Depending on the benefits offered, other requirements may apply, such as The Health Insurance Portability and Accountability Act of 1996 (HIPAA) privacy or The Consolidated Omnibus Budget Reconciliation Act (COBRA) if the coverage is subject to ERISA.

Many employers already have ERISA-covered plans and choose to offer supplemental benefits on a group plan basis. The determination of whether a plan meets the voluntary plan safe harbor under ERISA depends on all the details of the arrangement.

The bottom line for employers who want to have a high-level of certainty that their plan is not subject to ERISA is to limit their involvement to actions that clearly fall within the safe harbor and to structure payroll deductions so that insurance premiums are paid on an after-tax basis. Employers should consult with their own advisors to determine whether their arrangement is subject to ERISA.