A federal district court in Texas made headline news in December 2018 when it ruled that the Affordable Care Act (ACA) was unconstitutional and, therefore, invalid. The decision was appealed, and it’s likely that it will ultimately be reviewed by the Supreme Court. While the case is significant because a final ruling could dismantle the current law, the bottom line is the ACA remains in effect for now. And because it’s still the law of the land, employers and insurers need to continue to comply with its rules and regulations. This article provides a high-level overview of the court case and potential long-term implications.

This lawsuit is specifically aimed at the individual mandate and the corresponding tax penalty on individuals who don’t have qualifying health coverage. The history of the case dates back to 2012:

What do employers need to do now?

The short answer is nothing. Because the district court decision is “stayed” pending appeal of the case, the ACA remains in effect. It is expected to take some time for the case to work through the appeals process. A final decision is not expected until 2020, but could be even later.

As the lawsuit works through the appeals process, employers and insurers need to continue to comply with the ACA. This includes:

Regardless of how the lawsuit turns out, starting in January 2019 and into the foreseeable future, there is no penalty for individuals who don’t have qualifying health coverage.

What happens if the Supreme Court rules the ACA unconstitutional? 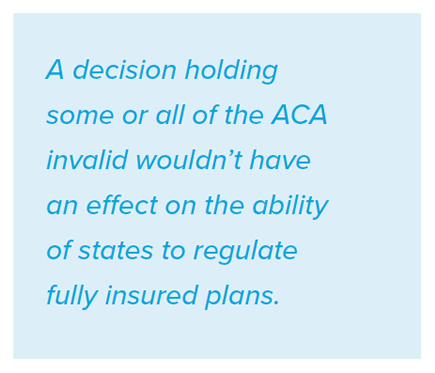 We can’t really know the answer to this question unless and until such a decision is reached. However, there are two possible options. A final decision could rule that (1) all of the ACA is unconstitutional or (2) just certain parts of the law are unconstitutional. If some or all of the ACA health coverage mandates are ruled unconstitutional, then employers will have new decisions to make about their benefits programs. For example, some employers may decide to keep in place certain aspects of the law that are very popular, such as coverage of certain preventive care services without cost sharing and coverage of dependent children to age 26, while adjusting other aspects of plan coverage (e.g., imposing dollar limits on certain benefits). A decision holding some or all of the ACA invalid wouldn’t have an effect on the abilities of states to regulate fully insured plans. So, state laws and insurance mandates will continue to be an issue for fully insured plans.

The federal district court ruling sparked a lot of media attention, but for now, the ACA is in effect. It will take some time for the case to make its way through the appeals process, and a final decision isn’t expected before 2020. Employers may want to start considering what sort of plan changes they’d make if some or all of the ACA is eventually ruled invalid, but for now, employers and insurers must continue to comply with the ACA.