COLUMBUS, Ga., Aug. 21, 2019 /PRNewswire/ -- Aflac, the leader in supplemental insurance sales at U.S. worksites, today announced a high-powered football-themed marketing campaign that is among the most integrated in company history. The company will present a series of commercials featuring Coach Nick Saban and the Aflac Duck as well as expand its public relations and social media presences. The campaign features Coach Saban doing what he does best: recruiting star players, just as Aflac attracts potential policyholders.

"I am excited to take on this health issue because health insurance doesn't always cover everything, and I want to help Aflac recruit hardworking Americans so they can better protect themselves and their families," said Coach Nick Saban. "When I'm sitting down with a top recruit, I know there is a lot of competition out there, so I need to be honest about why choosing my team is the best option. I think we create more value for the player just like Aflac creates that same kind of value for its customers – for most people, not having supplemental insurance coverage could be like playing the game of life without a complete team."

"This powerful, integrated marketing effort has me more excited than ever about football season," said Teresa White, president of Aflac U.S. "We've put together a winning strategy that resonates with college football's passionate male and female fan base. As we educate future policyholders about our brand, we aim to help more people protect themselves from one of the greatest financial problems of our time: the expenses health insurance doesn't cover."

In 2019, Aflac initiated a new marketing campaign called "Aflac Isn't," designed to help consumers better understand Aflac's products and services by first clarifying what Aflac isn't. On Aug. 24, the company will debut the first in a new series of television commercials featuring Coach Saban, which will deliver on the next phase of the ongoing campaign and show that "Aflac isn't used how you think it's used."

The first television spot, "The Visit," debuts during the 7 p.m. EDT game on ESPN. It will be followed by two subsequent spots, "Campus Tour" and "Commitment Day," debuting mid-season and during the Southeastern Conference (SEC) Championship game, respectively.

"Our campaign to correct common misperceptions about our products and services is well underway," said Shannon Watkins, vice president of Brand and Creative Services at Aflac. "During football season, Coach Saban, considered one of the greatest coaches of all time, and our Aflac Duck, the greatest duck of all time, will take us on a recruiting journey that parallels Aflac sales agents' efforts to recruit new policyholders. We'll follow them from the home visit to the campus visit and, ultimately, to signing day." 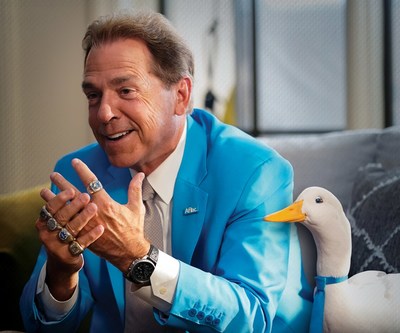 Aflac will integrate the new campaign into its social media presence (follow @AflacDuck on Twitter, Instagram and Facebook) as well as into its long-running "Aflac Trivia Question" on CBS and ESPN, which is being revamped to feature enhanced animation. In addition to continuing its support of ESPN, CBS, Home Team Sports and Raycom Sports, Aflac is adding the Southeastern Conference and the SEC Network to its media focus.

Aflac works with a portfolio of agencies for integrated campaigns. The agency team for this campaign included Publicis Seattle for broadcast creative, Spark Foundry for media buying and planning, Dagger/Atlanta for social media and Melt/Atlanta for SEC collaboration.