For more than 20 years, Aflac has dedicated its heart and philanthropic mission to helping children with cancer.

Social responsibility is the keystone around which Aflac was built when the company was founded in 1955. Still today, this strong commitment guides Aflac to continuously seek ways to make a positive difference in the lives of individuals and families around the world – especially children diagnosed with cancer.

The Aflac Foundation, Inc. supports children with cancer and select other charitable causes. Our core focus is the Aflac Childhood Cancer Campaign, which touches the lives of these young patients around the country in many ways.

Comforting Children Who Have Cancer

Cancer is difficult, and it can be lonely. My Special Aflac Duck™ is a "smart" comforting companion created by Aflac and available via participating hospitals, free of charge, to every child, ages three and up, who has cancer. With four patents pending, lifelike movement and emotions, and a mixed-reality app, this innovative social robot uses interactive play to help distract children coping with cancer. Learn more about My Special Aflac Duck™ at www.aflacchildhoodcancer.org. 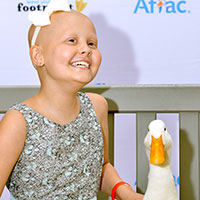 Since 1995, Aflac has raised and donated more than $140+ million to the Aflac Cancer and Blood Disorders Center of Children’s Healthcare of Atlanta. Much of Aflac’s support comes from its independent sales agents, who contribute donations from their monthly commission checks, as well as Aflac employees who contribute each month through payroll deduction.

Duckprints is a national grassroots social media movement initiated in 2013 to raise awareness and donations for childhood cancer research and programs. Duckprints Awards honor individuals across the country who have made a positive impact in the lives of children and families affected by pediatric cancer, including encouraging others to become involved in the cause.

The Aflac Parents House in Japan provides cheerful and spacious accommodations where pediatric patients and their families can stay together in a home-away-from-home environment while they take on the task of fighting cancer or other serious diseases. Aflac Japan joined with the Children's Cancer Association of Japan to build Aflac Parents Houses, which are comprehensive support centers for children and their parents who are traveling for medical treatment. Through generous donations from Aflac Japan’s employees and sales agents, the three Aflac Parents Houses have helped thousands of children and their families battling chronic diseases like pediatric cancer.

Not only is Aflac Japan committed to serving and helping children battling cancer, it also works very hard to provide support to those who have lost a parent to cancer. The Aflac Scholarship Fund for Childhood Cancer Survivors and Children of Cancer Victims was established to provide financial assistance to high school students who have lost a parent to cancer, with the goal of lessening the financial burden associated with attending high school. Each year the program disperses funds to eligible recipients facing economic hardship who meet a specified level of academic achievement. Each scholarship recipient receives ¥25,000 per month to assist them with educational and living expenses until they graduate from high school. Thus far, Aflac Japan is proud to have provided this scholarship to more than 2,300 students.