COLUMBIA, S.C., Sept. 21, 2018 /PRNewswire/ -- Aflac, the leader in voluntary insurance sales at U.S. worksites, today delivered My Special Aflac Duck™ to Palmetto Health Children's Hospital in Columbia, South Carolina. My Special Aflac Duck, designed by Sproutel, is a social robot that uses medical play, lifelike movement and emotions to engage and help comfort kids during their cancer care. Today's first-ever delivery to Palmetto Health Children's Hospital follows more than 18 months of child-centered research conducted with children, parents and medical providers at the Aflac Cancer Center in Atlanta. Since 2010, Columbia has been the home for Aflac Group insurance, employing more than 850 people in the Midlands. 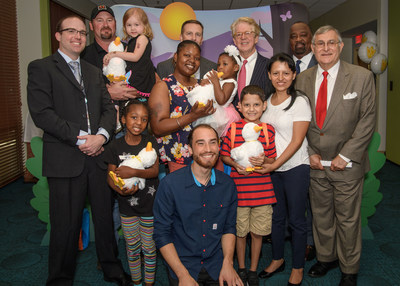 "We are extremely excited to deliver the first order of My Special Aflac Ducks to Palmetto Health Children's Hospital so that the children being treated here can find some comfort in what is often a very challenging time," Aflac Chairman and CEO Dan Amos said. "Palmetto Health Children's Hospital and the entire Midlands community have always welcomed Aflac with open arms, and we want to make sure that we give back to this community, as well as the entire nation, as we kick off this remarkable program that will help make children with cancer feel better."

At the delivery event, attendees were treated to a demonstration of My Special Aflac Duck by Aaron Horowitz, chief executive officer of Sproutel, showcasing how it will help comfort children and serve as a tool for health care professionals to use with their patients. After the demonstration, children and their parents were sent on a fun scavenger hunt, finding clues and visiting various locations at the hospital, eventually leading them to the discovery of their very own My Special Aflac Duck.

"Today's introduction of My Special Aflac Duck here in Columbia is a memorable day for the children being treated for cancer at Palmetto Health Children's Hospital, their parents and, of course, the entire Aflac family," The Aflac Foundation, Inc. President Kathelen Amos said. "The Aflac Duck has now become a tangible, innovative companion for brave and special children as they go through their cancer journey. Delivering My Special Aflac Duck here and to hospitals across the nation is a source of great pride for Aflac."

Later this year, Aflac will expand its My Special Aflac Duck campaign to hospitals across the country, providing a My Special Aflac Duck to any newly diagnosed child, ages 3-13, free of charge. At a cost of $200 per unit, Aflac has invested approximately $3 million to the program to date.

"Today, and every day, we celebrate the incredible work of the Aflac family," Palmetto Health Foundation President Samuel Tenenbaum said. "My Special Aflac Duck symbolizes Aflac's unwavering commitment to fighting childhood cancer in our community and beyond. We're very proud to partner with them to bring joy to our children being treated for cancer at Palmetto Health Children's Hospital."

"This is a great way to celebrate National Childhood Cancer Awareness Month and Aflac's commitment to the people and families of Columbia and South Carolina," Aflac Group President and U.S. Chief Operations Officer Virgil Miller said. "For more than two decades, our company has been at the forefront of corporate responsibility, dedicating time and resources toward helping children and families cope with childhood cancer. After nearly two years of research and development, we could not be more proud to extend this commitment by introducing My Special Aflac Duck to this wonderful community."

"It's an honor and privilege to be a part of something so special.  My Special Aflac Duck will provide countless hours of support, comfort and joy to children undergoing cancer treatment and their families.  I'm proud of Aflac's commitment to this cause," said Rich Williams, Aflac executive vice president, chief distribution officer.

Since 1995, Aflac has contributed more than $125 million to the pediatric cancer cause, including more than $500,000 donated each month by 17,000 independent agents licensed to sell Aflac products. The funds are committed directly from their monthly commission checks. To see My Special Aflac Duck in action and to learn more about this important cause, please visit AflacChildhoodCancer.org.

About Aflac
When a policyholder gets sick or hurt, Aflac pays cash benefits fast. For more than six decades, Aflac insurance policies have given policyholders the opportunity to focus on recovery, not financial stress. In the United States, Aflac is the leader in voluntary insurance sales at the worksite. Through its trailblazing One Day PaySM initiative, for eligible claims, Aflac U.S. can process, approve and electronically send funds to claimants for quick access to cash in just one business day. In Japan, Aflac is the leading provider of medical and cancer insurance and insures 1 in 4 households. Aflac insurance products help provide protection to more than 50 million people worldwide. For 12 consecutive years, Aflac has been recognized by Ethisphere as one of the World's Most Ethical Companies. In 2018, Fortune magazine recognized Aflac as one of the 100 Best Companies to Work for in America for the 20th consecutive year and included Aflac on its list of World's Most Admired Companies for the 17th time. Aflac Incorporated is a Fortune 500 company listed on the New York Stock Exchange under the symbol AFL. To find out more about Aflac and One Day PaySM, visit aflac.com or aflac.com/espanol. 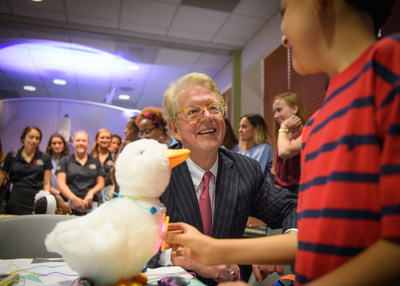