COLUMBUS, Ga., Sept. 10, 2020 /PRNewswire/ -- Aflac, a leader in supplemental insurance at U.S. worksites, today is launching its second marketing campaign featuring legendary football coach Nick Saban and the Aflac Duck during the NFL game between the Houston Texans and the Kansas City Chiefs, airing at 8:20 p.m. EDT on NBC. The two-spot campaign, titled "The Program," was created in partnership with Dagger, Aflac's agency of record. 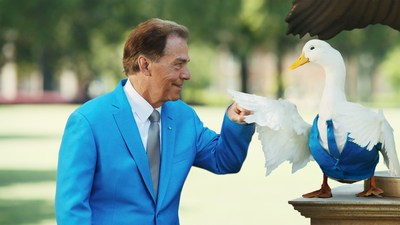 "The Program" builds on the insurer's 2019 "Aflac Isn't" campaign, which helped clear up misconceptions about how the insurer's plans work. The 2019 campaign set the stage for Coach Saban and the Aflac Duck to focus consumers on what "Aflac Is" — a company that will be there for policyholders when they need help most.

The first of Aflac's new television spots, "Go Time," is supported by social media, including previews of the campaign currently available on Twitter, public relations efforts and messaging for business owners. It features Coach Saban, the Aflac Duck and Aflac team members as they dig in to talk about how Aflac provides the coverage that policyholders need to help defend against life's potential challenges. Coach Saban leads an impromptu quiz, as team members show they've studied their playbooks by accurately stating that Aflac helps with expenses health insurance doesn't cover. A second spot, "Film Room," airs later in the year.

"I'm happy to work with Aflac because it's a company of integrity," Coach Saban said. "When Aflac says it will be there for policyholders when help is needed most, you can be sure that promise will be kept. I like that kind of accountability."

Valencia Mitchell, Aflac's vice president of Brand Strategy, Insights and Advertising, said the campaign is designed to create a sense of familiarity as Americans deal with the effects of the current pandemic. Although fall traditionally is all about football, COVID-19 means sports will be different for months to come.

"The pandemic has created a new normal for Americans, and sports are no exception. This campaign gives consumers seeking refuge from real challenges a taste of fall football by taking them inside the 'Aflac Program.' At the same time, it give us a unique opportunity to show cash-strapped consumers that during difficult times our policies can have more value than ever."

In addition to continuing its national media focus with ESPN/ABC, the ACC Network and the SEC on CBS, Aflac is entering the second year of its official sponsorship of the Southeastern Conference and the SEC Network, creating new opportunities to drive brand awareness, knowledge and connection.

Aflac Incorporated (NYSE: AFL) is a Fortune 500 company, helping provide protection to more than 50 million people through its subsidiaries in Japan and the U.S., where it is a leading supplemental insurer by paying cash fast when policyholders get sick or injured. For more than six decades, insurance policies of Aflac Incorporated's subsidiaries have given policyholders the opportunity to focus on recovery, not financial stress. Aflac Life Insurance Japan is the leading provider of medical and cancer insurance in Japan where it insures 1 in 4 households. For 14 consecutive years, Aflac Incorporated has been recognized by Ethisphere as one of the World's Most Ethical Companies. In 2020, Fortune included Aflac Incorporated on its list of World's Most Admired Companies for the 19th time, and Bloomberg added Aflac Incorporated to its Gender-Equality Index, which tracks the financial performance of public companies committed to supporting gender equality through policy development, representation and transparency. To find out how to get help with expenses health insurance doesn't cover, get to know us at aflac.com or aflac.com/espanol.