COLUMBUS, Ga., Nov. 26, 2019 /PRNewswire/ -- Aflac, the leader in supplemental insurance sales at U.S. worksites, announced today that its iconic "spokesduck," the Aflac Duck, will glide down 6th Avenue in New York City during the 93rd Annual Macy's Thanksgiving Day Parade®, airing Thursday, Nov. 28, on NBC. Aflac's beloved brand icon will appear in the annual spectacle and the broadcast, which airs from 9 a.m. to noon in all time zones, to help kick off the holiday season and warm the hearts of more than 3.5 million spectators on the city streets and more than 50 million viewers at home.

"The Aflac Duck has been entertaining Americans for nearly 20 years as one of the world's most famous brand icons, so we could not be more delighted that he will once again be part of the legendary Macy's Thanksgiving Day Parade on NBC," Aflac CEO and Chairman Dan Amos said. "The magic of the Aflac Duck, who is on a mission to help Americans understand that Aflac provides policyholders with cash benefits for things health insurance doesn't cover, is that he always brings a smile to faces of the young and old. We are excited to see happy parade watchers get a good look at the Aflac Duck as he sleds down 6th Avenue."

"We look forward to putting on America's favorite holiday event, the Macy's Thanksgiving Day Parade, all year long and are delighted that Aflac's famed Aflac Duck is returning to join our lineup of must-see entertainment," said Jordan Dabby, producer of the Macy's Thanksgiving Day Parade. "Bringing together people from across the nation to celebrate the start of the holiday season and witnessing the awe on their faces when they see our vibrant, larger-than-life lineup is what this magical event is all about, and we are thrilled to take it to new heights year after year."

For more than nine decades, the Macy's parade has wowed audiences with its jam-packed entertainment, and the 93rd edition will take it to the next level. This year's show will feature 16 giant character balloons; 40 novelty balloons, heritage balloons, balloonicles, balloonheads and trycaloons; 26 floats; 1,200 cheerleaders and dancers; more than 1,000 clowns and 8,000 volunteers; and 11 marching bands. 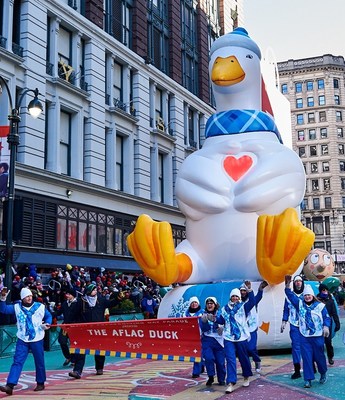