Request a Quote
Or fill out our contact form>
Back Next Submit
Thank You!

COLUMBUS, Ga., June 21, 2019 /PRNewswire/ -- Aflac, the leader in supplemental insurance sales at U.S. worksites, announced today that My Special Aflac Duck®, a robotic duck that helps comfort children with cancer, has grabbed two Silver PR Lions at the Cannes Lions International Festival of Creativity in Cannes, France. In the Public Relations (PR) category, which, according to the Festival's website, celebrates the craft of strategic and creative communication, 1,857 entries were received with only 55 Lions awarded. In addition to honors at the Cannes Festival, My Special Aflac Duck received Best In Show at the 2018 Consumer Electronics Show and the People's Choice Award at SXSW this year. My Special Aflac Duck was designed by Sproutel, a patient-centered R&D company based in Providence, Rhode Island. 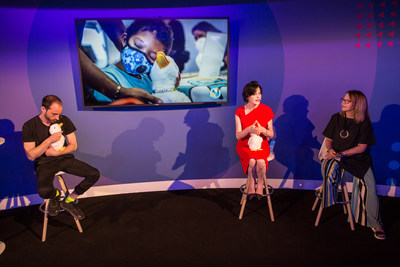 "We are extremely pleased that the Cannes Lions International Festival has recognized My Special Aflac Duck as being among the most elite programs in the world for what it has done to help children with cancer," Aflac Chairman and CEO Dan Amos said. "We certainly appreciate these incredible accolades. However, the true reward is in seeing the look on a child's face when he or she receives one of these special robotic ducks. There is no price you can place on seeing the eyes of a brave child battling cancer light up when they receive one of their very own."

Research shows that children who are diagnosed with cancer often experience loneliness and a loss of control, and many lack the ability to express their feelings about what they are going through. My Special Aflac Duck is designed to help address these challenges through play and help distract children from the rigors of their treatments.

Since September 2018, Aflac has been delivering My Special Aflac Ducks to children at hospitals across the nation. To date, more than 4,400 children at more than 200 hospitals in 47 states have received a duck, free of charge. According to the National Cancer Institute, as many as 16,000 children are diagnosed with cancer each year in the United States. Aflac recently announced a pilot program to provide My Special Aflac Duck to children with cancer in Japan, where the company is also a leading provider in supplemental insurance.

"The overwhelming interest and accolades that My Special Aflac Duck has received is due in large part to how the program harmonizes corporate responsibility, communications and authenticity," Aflac Senior Vice President, Chief Communications and ESG Officer Catherine Hernandez-Blades said. "The genuine concern that our company, independent agents and the Aflac Foundation have demonstrated for more than two decades, contributing more than $134 million to helping children and families cope with cancer since 1995, created a natural progression toward using our iconic mascot to create a tangible way to help children through incredibly difficult challenges. Our entire company has rallied around this cause and My Special Aflac Duck."

Aflac worked with key agencies like Carol Cone ON PURPOSE, Marina Maher Communications, Nation of Artists and KWI Communications on the My Special Aflac Duck program, which has generated more than 1,000 individual media stories since 2018.