NEW ORLEANS, Nov. 29, 2018 /PRNewswire/ -- Aflac, the leader in voluntary insurance sales at U.S. worksites, today delivered the first My Special Aflac Ducks to Children's Hospital in New Orleans. My Special Aflac Duck, designed by Sproutel, is a social robot that uses medical play, lifelike movement, and emotions to engage and help comfort kids during their cancer care. Today's delivery to Children's Hospital in New Orleans follows more than 18 months of child-centered research conducted with children, parents and medical providers at the Aflac Cancer and Blood Disorders Center of Children's Healthcare of Atlanta. 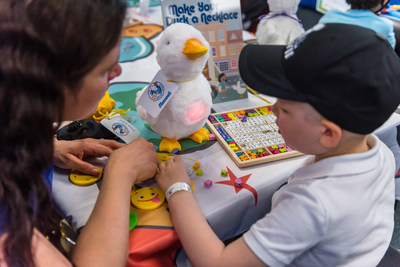 "As we begin the holiday season we are proud to deliver My Special Aflac Ducks to children and families facing childhood cancer here at Children's Hospital in New Orleans," Aflac Chairman and CEO Dan Amos said. "My Special Aflac Duck will help provide comfort and joy for children who need it most during this special time of year and throughout their treatments on the road to recovery. Aflac is pleased to make this investment for these courageous kids in such a great community."

"We are so pleased to extend My Special Aflac Duck to this wonderful community and create a memorable day for children as a symbol of Aflac's unwavering commitment to families facing childhood cancer. It is a great source of pride for the entire Aflac family," The Aflac Foundation, Inc. President Kathelen Amos said. "On behalf of our employees and independent agents, we want to thank the patients, families and caregivers for allowing us to share our new, innovative Aflac Duck with brave and special children in such an impactful way this holiday season."

"When we first heard what Aflac was doing to support children with cancer, we knew we wanted to be a part of this incredible and innovative program," Children's Hospital, New Orleans Vice President of Development Alicia Franck said. "My Special Aflac Duck is truly a remarkable way to engage children in our hospital and allow them to express themselves through both the difficult and joyful times."

"For more than 20 years, Aflac's efforts to help children and families facing childhood cancer have been at the forefront of our corporate responsibility program. Today, we celebrate Aflac's commitment to the people and families of New Orleans, the Gulf South and beyond," Aflac Senior Vice President and Chief Brand and Communications Officer Catherine Hernandez-Blades said. "We are working to bring My Special Aflac Duck nationwide, to the more than 15,000 children diagnosed with cancer in America each year. We are so thankful for Children's Hospital in New Orleans for helping us come closer to reaching that goal."

Since 1995, Aflac has contributed more than $128 million to the pediatric cancer cause, including more than $500,000 donated each month by 17,000 independent agents licensed to sell Aflac products. The funds are committed directly from their monthly commission checks. To see My Special Aflac Duck in action and to learn more about this important cause, please visit AflacChildhoodCancer.org.

About Aflac
When a policyholder gets sick or hurt, Aflac pays cash benefits fast. For more than six decades, Aflac insurance policies have given policyholders the opportunity to focus on recovery, not financial stress. In the United States, Aflac is the leader in voluntary insurance sales at the worksite. Through its trailblazing One Day PaySM initiative, for eligible claims, Aflac U.S. can process, approve and electronically send funds to claimants for quick access to cash in just one business day. In Japan, Aflac is the leading provider of medical and cancer insurance and insures 1 in 4 households. Aflac insurance products help provide protection to more than 50 million people worldwide. For 12 consecutive years, Aflac has been recognized by Ethisphere as one of the World's Most Ethical Companies. In 2018, Fortune magazine recognized Aflac as one of the 100 Best Companies to Work for in America for the 20th consecutive year and included Aflac on its list of World's Most Admired Companies for the 17th time. Aflac Incorporated is a Fortune 500 company listed on the New York Stock Exchange under the symbol AFL. To find out more about Aflac and One Day PaySM, visit aflac.com or aflac.com/espanol.