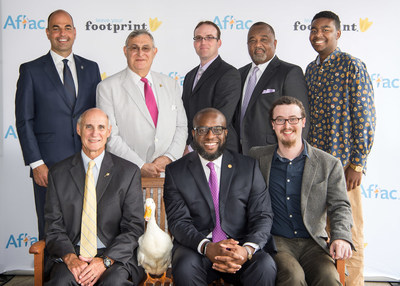 "Aflac passionately supports children and families facing pediatric cancer because we know the devastating effects that a cancer diagnosis for a child can have on a family," Aflac Foundation President Kathelen Amos said. "We started our journey more than 20 years ago to help health care providers and researchers find better treatments and cures for childhood cancer. We are so proud to work alongside the outstanding individuals who were honored with Duckprints Awards today, and we'll keep supporting this cause until we find a cure."

The 2017 Duckprints Award recipients are:

Childhood cancer is the leading cause of death by disease for children under the age of 15, according to the National Cancer Institute. Yet, less than 4 percent of all federal funding for cancer research goes toward pediatric cancer, according to the Children's Cancer Fund. That's why since 1995, Aflac has contributed more than $117 million to bridge the gap in funding and help find a cure. In fact, each month, more than 17,000 Aflac independent sales associates contribute more than $500,000 from their commission checks to support childhood cancer research and treatment.

As part of the grassroots Duckprints campaign that began in 2013, Aflac is calling on people across America to become active in the cause. In honor of national Childhood Cancer Awareness Month in September, Aflac is matching donations to Palmetto Health Children's Hospital, up to $5,000, until Sept. 30. Aflac also is donating $2 to children's cancer treatment and research for each Duckprints-related social media activity on Facebook, Twitter, YouTube and/or Instagram, up to $1.5 million. Related social actions include:

Aflac also created a website (aflacduckprints.com) that enables users to nominate unsung heroes in their community who have made a difference in the lives of children and families facing cancer. People can follow the Aflac Duck on his journey to hospitals around the country honoring those heroes. In addition, merchandise such as plush Aflac Ducks and Duckprints-related T-shirts, slippers and other items are available for purchase at aflacduckprints.com, with all of the net proceeds going toward the treatment and research of childhood cancer.

About Duckprints Award Recipient Craig Q. King
Many people spend their entire lives searching for purpose. Clarity of purpose, for some, develops later in life—or never at all. At age 17, Craig King discovered his purpose: "to inspire, teach and serve the people of the world." Craig is living his purpose and considers it a gift given to him by cancer.

In 1999, Craig was diagnosed with osteosarcoma, a type of bone tumor. After his left tibia and kneecap were removed and reconstructed, he began a year of chemotherapy in the Children's Center for Cancer and Blood Disorders at Palmetto Health Children's Hospital. This life-changing experience opened Craig's heart to selfless giving. After completing treatment and learning to walk again, Craig was inspired to become a mentor and counselor in 2001 for CAMP KEMO, an annual camp for children facing cancer and their siblings. Soon after, Craig co-founded Craig Q. King's Celebration of Life Gala with his mother, Paulette King. Over the years since his diagnosis, Craig and his family have raised more than $100,000 in event proceeds that have been donated to Children's Hospital and other charitable organizations.

Craig, a native of Manning, S.C., is director of governmental affairs for the Palmetto State Teachers Association in Columbia and is the CEO and founder of the Craig King Group LLC. He has been recognized with numerous leadership awards, including the 2007-2008 District Teacher of the Year for Orangeburg Consolidated School District Five; the 2008 Charles Dickerson Community Service Award, presented to one South Carolina teacher for service to the community; and the 2013 M. A. Lee Scholarship Gala Medical and Health Activist Award.

About Duckprints Award Recipient Julian E. Ruffin, Ph.D.
Diligence, passion and selflessness—three components that make up the body and soul of those who serve as trailblazers for the greater good. For nearly 35 years, Julian Ruffin has demonstrated this type of servant leadership in the community.

Working as the director of the child and adolescent division of Columbia Area Mental Health Center in 1981, Julian began his relationship with Palmetto Health Children's Hospital as a volunteer. He spent countless lunch breaks working with patients and families who were having a difficult time emotionally during treatment. This fueled his desire to get more involved. In 1983, he became a volunteer counselor with the adolescent boys at CAMP KEMO, a one-week summer camp for children with cancer and their siblings. CAMP KEMO became one of his greatest passions, both personally and professionally. Two years later, he was one of the co-founders of Lasting Impressions, a peer support group for teen cancer patients and survivors. In 1993, after 12 years of volunteering, he joined the Children's Center for Cancer and Blood Disorders team as coordinator of psychosocial programs and clinical associate professor of pediatrics with the USC School of Medicine.

In the years that followed, Julian developed other innovative programs such as the Gather, Relax and Come Eat (GRACE) dinner; HUGGIES, a parent support group for those with preschool children being treated for cancer; Family Weekend, a three-day retreat for newly diagnosed families to provide peer support; and Camp New Horizons, a weekend camp for children who have lost their siblings to cancer or a blood disorder. He continued his passion for CAMP KEMO by becoming the leader for the Counselors in Training (CITs) and was instrumental in advocating for a CAMP KEMO web page so parents could see pictures of their children participating at camp. Julian also was an active member of the professional advisory group for the pastoral care department and served as chair of this group for many years. He also led seminars on grief and loss in children for clinical pastoral education students and medical residents. Now retired, Julian is spending some of his free time volunteering with the Palmetto Conservation Foundation and as a disaster mental health volunteer with the American Red Cross.

About Duckprints Award Recipient Curing Kids Cancer (Clay and Grainne Owen)
Clay and Grainne Owen's life took a significant detour when their son, Killian, passed away from leukemia in 2003. From that moment forward, the Owens made a commitment to create a legacy for Killian that would be carried out through Curing Kids Cancer, established in 2005.

For nearly 12 years, Curing Kids Cancer has partnered with Palmetto Health Foundation and Palmetto Health Children's Hospital to support the Children's Center for Cancer and Blood Disorders. More than $312,000 has been donated to help fund a research nurse and advancements in childhood cancer treatment. This funding set Children's Hospital into motion to bring stage one and stage two clinical trials, the most innovative therapies, to children in South Carolina. Without these treatments, children would likely have to travel outside of the state and leave their families and support systems.

About Aflac
When a policyholder gets sick or hurt, Aflac pays cash benefits fast. For more than six decades, Aflac insurance policies have given policyholders the opportunity to focus on recovery, not financial stress. In the United States, Aflac is the leader in voluntary insurance sales at the worksite. Through its trailblazing One Day PaySM initiative, Aflac U.S. can receive, process, approve and disburse payment for eligible claims in one business day. In Japan, Aflac is the leading provider of medical and cancer insurance, and insures 1 in 4 households. Aflac insurance products help provide protection to more than 50 million people worldwide. For 11 consecutive years, Aflac has been recognized by Ethisphere as one of the World's Most Ethical Companies. In 2017, Fortune magazine recognized Aflac as one of the 100 Best Companies to Work For in America for the 19th consecutive year and included Aflac on its list of Most Admired Companies for the 16th time. In 2015, Aflac's contact centers were recognized by J.D. Power by providing "An Outstanding Customer Service Experience" for the Live Phone Channel. Aflac Incorporated is a Fortune 500 company listed on the New York Stock Exchange under the symbol AFL. To find out more about Aflac and One Day PaySM, visit aflac.com or espanol.aflac.com.