Aflac is recognized for its long-standing commitment to diversity, equity and inclusion

COLUMBUS, Ga., April 26, 2022 /PRNewswire/ -- Aflac Incorporated, a leading provider of supplemental insurance in the U.S., has been recognized by Forbes as one of the Best Employers for Diversity for the fourth consecutive year. Aflac was also recently ranked No. 58 out of 500 employers listed in Forbes' 2022 list of America's Best Midsized Employers. 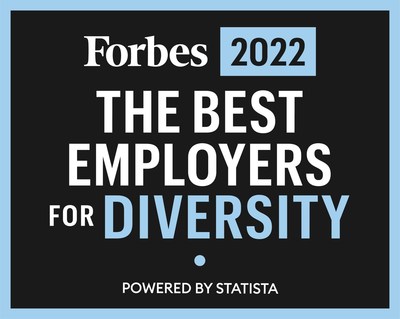 "Throughout our history, Aflac has consistently demonstrated how our diverse workforce makes us stronger."

The prestigious award is presented by Forbes and Statista Inc., the world-leading statistics portal and industry ranking provider, according to Forbes. The Best Employers for Diversity were selected based on Statista's innovative methodology, guaranteeing unbiased results and providing reliable insights. More than 60,000 U.S. employees were surveyed in companies with a minimum of 1,000 employees to identify the Best Employers for Diversity.

"Throughout our history, Aflac has consistently demonstrated how our diverse workforce makes us stronger and that true diversity and inclusion only happens when a company is purposeful in its commitment to ensuring opportunity for all," said Dan Amos, Aflac Chairman and CEO. "This award is a testament to our diverse talent and mindful leaders who prioritize fairness. We are proud to be recognized on the Forbes Best Employers for Diversity list."

Aflac's culture reflects its long-standing commitment to diversity, equity and inclusion (DE&I) at all levels of the company. For example, 66% of Aflac's U.S employees are women and nearly 50% are people of color. Women hold 49% of leadership roles and 28% of senior management roles. Additionally, 64% of the company's board of directors are women and people of color. In 2021, 72% of Aflac's corporate donations were earmarked toward underserved communities.

Aflac Incorporated (NYSE: AFL) is a Fortune 500 company helping provide protection to more than 50 million people through its subsidiaries in Japan and the U.S., where it is a leading supplemental insurer by paying cash fast when policyholders get sick or injured. For more than six decades, insurance policies of Aflac Incorporated's subsidiaries have given policyholders the opportunity to focus on recovery, not financial stress. Aflac Life Insurance Japan is the leading provider of medical and cancer insurance in Japan where it insures 1 in 4 households. In 2021, the company was included in the Dow Jones Sustainability North America Index and became a signatory of the Principles for Responsible Investment (PRI). In 2022, Aflac Incorporated was included on Ethisphere's list of the World's Most Ethical Companies for the 16th consecutive year, Fortune's list of World's Most Admired Companies for the 21st time and Bloomberg's Gender-Equality Index for the third consecutive year. To find out how to get help with expenses health insurance doesn't cover, get to know us at aflac.com or aflac.com/español. Investors may learn more about Aflac Incorporated and its commitment to ESG and social responsibility at investors.aflac.com under "Sustainability."

To determine the list, Statista surveyed 60,000 Americans working for businesses with at least 1,000 employees. All the surveys were anonymous, allowing participants to openly share their opinions. Respondents were first asked to rate their organizations on criteria such as age, gender, ethnicity, disability and sexual orientation equality, as well as that of general diversity. These responses were reviewed for potential diversity gaps. Statista then asked respondents belonging to underrepresented groups to nominate organizations other than their own. The final list ranks the 500 employers that not only received the most recommendations, but also boast the most diverse boards and executive ranks and the most proactive diversity and inclusion initiatives. The survey period ran from September to October 2021.