COLUMBUS, Ga., Oct. 1, 2020 /PRNewswire/ -- Aflac, a leading provider of supplemental insurance and products in the U.S., today celebrated its 65-year commitment to be there in people's time of need, releasing its 2019 Corporate Social Responsibility (CSR) Report, "Investing Today for a Better Tomorrow." The report highlights the company's recent accomplishments to create a brighter future for its employees, customers, communities and stakeholders through ethics, philanthropy, the environment, and diversity, equity and inclusion.

"While this report reflects upon the events of last year, the magnitude of the events of 2020 cast an even greater spotlight on a company's purpose—the core values guiding its impact on the world," said Catherine Hernandez-Blades, Aflac senior vice president and chief environmental, social, governance (ESG) and communications officer. "At Aflac, being an ethical, purpose-driven company is in our DNA, as is demonstrated in the way we treat our employees, customers, investors and all stakeholders. This CSR Report highlights our investment in tomorrow for future generations, taking care of our environment and giving back to our communities."

The report includes activities in 2019 in both the U.S. and Japan. Aflac's products protect more than 50 million people worldwide. With a focus on Aflac's culture of ethical engagement with all its stakeholders, the report features key accomplishments in four areas: governance, workplace, philanthropy and environment. Highlights include:

The 2019 Aflac Corporate Social Responsibility Report marks the company's fifth year of dedicated work toward adherence to the Global Reporting Initiative (GRI) Standards, reported in IR Magazine as the world's most widely used sustainability reporting framework.* This is also the third year the report has included United Nations Sustainable Development Goals (SDGs). Disclosures that reference GRI Standards and SDGs, the latest guidelines, are noted throughout the report.

Aflac Incorporated (NYSE: AFL) is a Fortune 500 company, helping provide protection to more than 50 million people through its subsidiaries in Japan and the U.S., where it is a leading supplemental insurer by paying cash fast when policyholders get sick or injured. For more than six decades, insurance policies of Aflac Incorporated's subsidiaries have given policyholders the opportunity to focus on recovery, not financial stress. Aflac Life Insurance Japan is the leading provider of medical and cancer insurance in Japan where it insures 1 in 4 households. For 14 consecutive years, Aflac Incorporated has been recognized by Ethisphere as one of the World's Most Ethical Companies. In 2020, Fortune included Aflac Incorporated on its list of World's Most Admired Companies for the 19th time, and Bloomberg added Aflac Incorporated to its Gender-Equality Index, which tracks the financial performance of public companies committed to supporting gender equality through policy development, representation and transparency. To find out how to get help with expenses health insurance doesn't cover, get to know us at aflac.com or aflac.com/espanol. 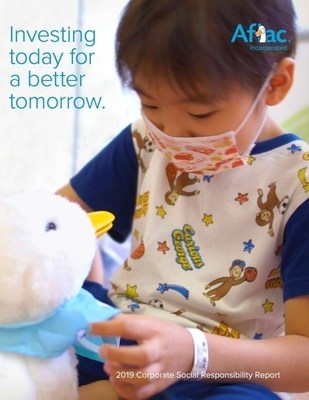