COLUMBUS, Ga., Feb. 25, 2020 /PRNewswire/ -- Aflac Incorporated today announced that it is once again included on the Ethisphere Institute's list of the World's Most Ethical Companies® for 2020. This marks the 14th consecutive year that the company has appeared on the prestigious list, making Aflac the only insurer to appear on the list every year since the inaugural recognition in 2007. According to Ethisphere, the World's Most Ethical Company recognition honors companies that take the long view with a purpose-based strategy and that strive to create positive change throughout their global communities. 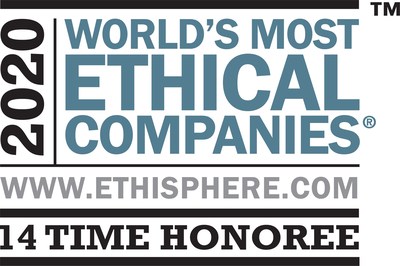 "Aflac is pleased to be among elite companies from around the world recognized for our commitment to doing business the right way," Aflac Chairman and CEO Dan Amos said. "The fact that we have received this incredible honor for 14 consecutive years is a testament to the people and programs that define Aflac as a company that cares. We never take our positive culture lightly and are grateful to Ethisphere for everything they do to foster a purpose-driven global business environment."

In 2019, Aflac reached significant corporate social responsibility (CSR) milestones, including surpassing $140 million in contributions to the treatment and research of childhood cancer. The company also delivered more than 6,200 My Special Aflac Ducks®, robotic caring companions designed to help children and families facing childhood cancer, free of charge, to children across the United States and Japan. The company was also recently named to Bloomberg's 2019 Gender-Equality Index.

"In addition to knowing that giving back is simply the right thing to do, Aflac prioritizes environmental, social and governance (ESG) programs because we understand that today's investors and consumers demand strong ethics and values," said Aflac Incorporated President and Chief Operating Officer Fred Crawford. "A strong ESG program, inclusive of CSR, is an essential part of any successful company's business plan. Companies like Aflac that appear on the 2020 World's Most Ethical Companies list understand this and have an advantage over competitors who do not."

According to Ethisphere, the World's Most Ethical Companies assessment is grounded in Ethisphere's proprietary Ethics Quotient®, a process that includes more than 200 questions on culture, environmental and social practices, ethics and compliance activities, governance, diversity and initiatives to support a strong value chain. The process serves as an operating framework to capture and codify the leading practices of organizations across industries and around the globe.

"Congratulations to everyone at Aflac for earning this recognition," said Ethisphere Chief Executive Officer Timothy Erblich. "This is a moment to acknowledge the leaders working to advance corporate cultures defined by integrity and affirm those companies contributing to broader societal imperatives and the greater good."

The full list of the 2020 World's Most Ethical Companies can be found here.

About Aflac Incorporated
Aflac Incorporated (NYSE: AFL) is a Fortune 500 company, helping provide protection to more than 50 million people through its subsidiaries in Japan and the U.S., where it is a leading supplemental insurer, by paying cash fast when policyholders get sick or injured. For more than six decades, insurance policies of Aflac Incorporated's subsidiaries have given policyholders the opportunity to focus on recovery, not financial stress. Aflac Life Insurance Japan is the leading provider of medical and cancer insurance in Japan, where it insures 1 in 4 households. Through its trailblazing One Day PaySM initiative in the United States, for eligible claims, Aflac can process, approve and electronically send funds to claimants for quick access to cash in just one business day. Fortune magazine recognized Aflac as one of the 100 Best Companies to Work for in America for 20 consecutive years. For 14 consecutive years, Aflac Incorporated has been recognized by Ethisphere as one of the World's Most Ethical Companies. In 2020, Fortune included Aflac Incorporated on its list of World's Most Admired Companies for the 19th time, and Bloomberg added Aflac Incorporated to its Gender-Equality Index, which tracks the financial performance of public companies committed to supporting gender equality through policy development, representation and transparency. To find out more about One Day PaySM and learn how to get help with expenses health insurance doesn't cover, get to know us at aflac.com.